Young Americans by Josh Stallings (Heist, November 20, 2015) – There’s something to say of rock and roll eras. You had the British Invasion of the 60’s or the hair metal havoc of the 80’s—easily identifiable and potent symbols of youth in rebellion. Though, there are few eras as absolutely, certifiably, mind-bending as the glam rock era. I can copy/paste all I want from Wikipedia to explain, but come on, like The Beatles or Motley Crue represent their era, David Bowie is the single name I can toss out there to give a perfect picture of the glam rock scene.

Which explains Josh Stallings’ latest, Young Americans—titles after a Bowie track—and soaked head to toe in eyeliner, glitter, and gutter trash. Already well-known for his fantastic Moses McGuire series and stunning (I cannot stress that enough, stunning) noir memoir, All the Wild Children, Josh Stallings comes out of the gate roaring with a filthy love letter to 70’s glam and the heist novel.

Sam, a down on her luck, legacy safe-cracker finds herself in the awkward position of owing the wrong guy a high amount of money. Seeing no other way out, she needs to jump headfirst back into her old life; bringing in old friends and her younger brother, who idolizes her despite his excess of smarts, and get in one last, desperate heist.

Stallings’ writing is a Willie Weeks bass-line—deceptively to the point, but with flourishes that stand out like flares. The strength of the story—the interpersonal relationships between this glam rock family—only help to ratchet up the tension in Sam’s situation. Stallings has us rooting immediately for Sam to make things work. We want her and her gang to not only get out of their situation in one piece, but with their heads up and their pockets fuller. And that’s not an easy task. Heist novels need to take great care to provide charismatic and damaged leads that readers happily root for even though thievery is morally repugnant. We want our Robin Hoods, but Sam doesn’t fit that mold at all. She’s a bit worn out and at times impulsive, but damn can she crack a  safe.

And don’t get me wrong; with outstanding dialogue, a clever means of bringing on the heavy subject matter, and a jet-powered pace, there’s a lot for me to love about Young Americans, but I really, really loved Stallings great care in describing Sam’s skills. There’s a rhythm to those scenes that drew me in and left me hypnotized. I can imagine that must be the draw of an activity like safe-cracking, a near catharsis, and Stallings captured that well for me.

Young Americans has rushed into my top ten list for 2015. Young Americans feels like teenage rebellion; raw, sexy, sweet, and ugly in all the prettiest ways. In the hands of most writers, I don’t think this story could have popped, but Stallings makes it look easy.

I am a sucker for a heist novel. Whether it’s amateurs pushed to economic extremes, “Born To Lose” punks with thirty-eights, or precise pros, the story of someone taking something from someone else always draws me in, no matter how well I’ve gotten to know the scores. I was excited to find out that one of my favorite hard boiled authors, Josh Stallings, was comitting his own style of literary larceny with Young Americans.

Set in the mid-seventies, Young Americans stars ringleader Sam, a former small time thief, scraping by as a stripper in Northern California. When her questionable boyfriend disappears with forty grand of her boss’ money, she must pay him back with either her money or her life. To get the money, she returns to her Bay Area home and enlists her old crew, enthusiastic participants in the glitter rock scene of the time. The crew includes her kid brother, Jacob; Candy, a glam rock princess and Jacob’s love interest, and Valentina, an African American Vietnam vet and transexual. The mark is a disco on New Year’s Eve. As you can guess, things don’t go as planned.

It is how Stallings spins these tropes that makes them work. His glam rock San Fransico gives the story a unique back drop, showing a group of young people pushing the views of culture and sexuality in a time of transition. Stallings explores how the heist plays with and against his characters’ emotions. Sam struggles to keep Jacob as safe as possible, but needs him around for the score to work. As part of their plan, Candy sleeps with the frontman of the disco’s opening act, wreaking havoc with Jacob’s emotions.

The author’s ability to play out the comaraderie aspect of the heist novel is what truly makes the story involving. Stallings’ seventies setting allows us to think back to the tribes we belonged to in our past, no matter what era, before marriage, family, and obligations made friendship a less concentrated form. He captures those connections of young people who would do whatever they could to back the other, no matter how stupid. When Sam and her crew learn how deep they are in, the implications of these connections become much more harrowing and serious.

Young Americans is a oddly sucessful hybrid of Richard Stark and Cameron Crowe. You root for these crazy kids to get the money, avoid murder by the mob, escape the law, and keep the bond they share together for as long as they can. You may end the novel yearning to listen to something on 8-track.

You can find Young Americans on our shelves and via bookpeople.com.

Stripper Sam is on the run. She leaves behind Hicksville USA and heads back to her family in San Francisco but trouble is soon barking and biting at her heels.

Stallings’ books are always great but this could well be his best yet. 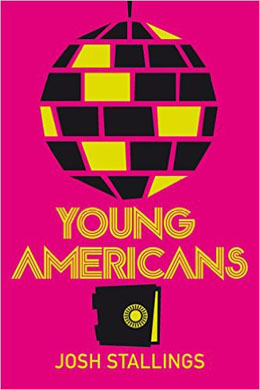